Wake up surrounded by nature, dedicate yourself to the well-being of body and mind, breathe deeply and enjoy your life!

Last minute and packages
Don't miss out on any of our special offers!
+39 370 3168983 farinaagriturismi@gmail.com

The charm of this region derives from its fusion of art, nature, peace and calm, the inspirations behind its various localities that comprise Renaissance masterpieces and small Medieval towns embedded in the hills.
In this area visitors will have the chance to enjoy an atmosphere of bygone times, among the medieval paths, the palaces, the castles and the fortresses of charming villages and will probably feel a strong impulse to come back one day.

Perugia, Umbria’s main city dates back to Antiquity and is composed of a higher section on the hill, whence the Medieval villages spread out on its slopes. The historic center teems with cultural and architectural masterpieces, with one of the most extensive museum collections in Italy.
Between art and spirituality, a visit to the Medieval town of Assisi is essential; a UNESCO World Heritage Site,its represents “a series of masterpieces of man‘s creative spirit.” Everything revolves around its most renowned citizen, St. Francis, Patron Saint of Italy: from the Basilica, which is dedicated to the Saint and contains his tomb, to the hermitage (Eremo delle Carceri), a few kilometers outside the town walls, where St. Francis used to retreat in prayer.
Then Spoleto, a picturesque town that boasts a thousand-year-old history, still preserves images from the past in its Medieval and Renaissance architecture.
Gubbio: the Cathedral; the Consul’s Palace, symbol of the town; and the Ducal Palace are just some of the attractions that testify to Gubbio's status as a jewel of Umbria.

Tuscany hosts innumerable astounding localities, many of which are also named UNESCO World Heritage Sites; of course, one must begin with Florence. Famous all over the world, the ancient Signoria dei Medici is the preeminent cradle of culture and art. It is a true museum under the sky containing countless monuments, including the Duomo, with Giotto’s Bell Tower; Santa Maria Novella; Palazzo Vecchio; and the Uffizi Gallery, with all its unique masterpieces.
Another extraordinary destination is Siena, with its Medieval town center– itself included on the UNESCO World Heritage List – and culminating with the evocative Piazza del Campo, also theatre for the famous Palio.
Pienza is the “ideal Renaissance town” that was wanted and created by Pope Pius II. The spectacular arrangement of the spaces and the richness of the buildings make this town an artistic treasure (an additional UNESCO insertion). San Gimignano stands out among the small towns of the region, a Medieval town characterized by its towers and “tower homes” (another site recognized by UNESCO). Of countless other Tuscan particularities, the Orcia Valley (UNESCO) deserves to be mentioned for the beauty of its fields and landscapes that have inspired many Renaissance artists.

A complete range of different types of Tailor made Holidays

The four-legged friends are welcome!
Discover the services dedicated to your pet: dog menu, cuddles, special attention for furry friends too.
MORE
Ideal farmhouse for families
Feel at home! Here children can free their curiosity: be active and adventurous!
MORE
Conviviality and sharing
Here you will find the perfect dimension to share cheerful moments with your friends.
MORE

A place where time seems
to have stopped
to leave space
for peace only. 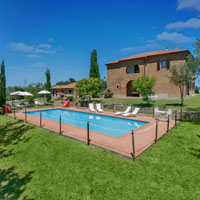 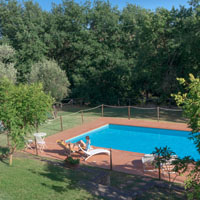 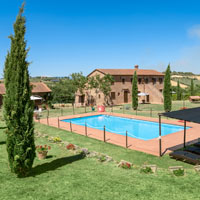 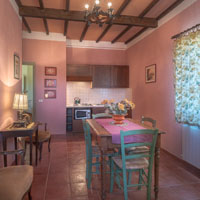 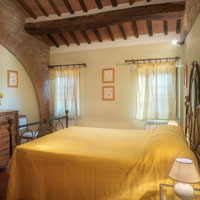 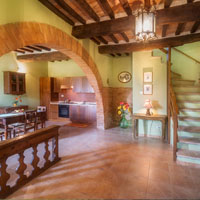